Brandon Sause, Portland, OR
Brandon plays the "Walnut Shred" Iris 8-string, demonstrating the flexibility of the 5 coil combinations and the utility of the treble bleed circuit. 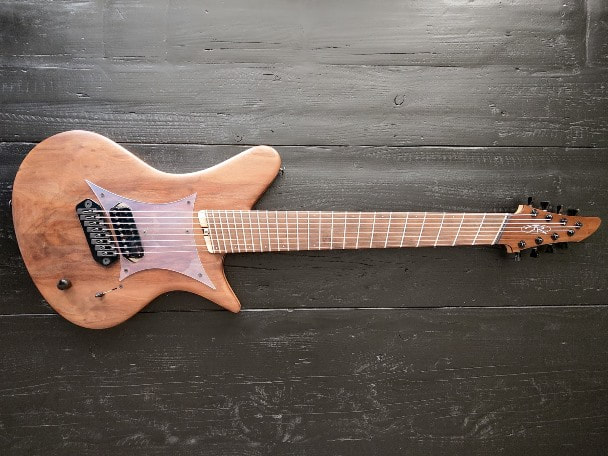 ​By Kirby Kuehl February 1, 2019
I first met Jason Rodgers of Jayemar Guitars at the Rose Quarter Guitar Festival in Portland, Oregon.  After wandering around the show looking at mostly vintage inspired instruments, I came across Jason and his booth of extended range guitars.  We struck up a friendly conversation about 8-string guitars, multi-scale frets, and of course Meshuggah.  I asked if I could try one of his instruments, and was soon plugged into a Fender Cyber Twin combo amp that was set to a modern metal tone.  I chugged and djented for a few minutes, and we talked back and forth about his 8-string Iris guitar and my initial impressions of the instrument.  Jason liked my playing enough that he thought it would be cool if I recorded some audio/video footage of his instrument.  After sorting out our busy schedules, Jason graciously dropped of the guitar and let me bond with it for a few weeks. 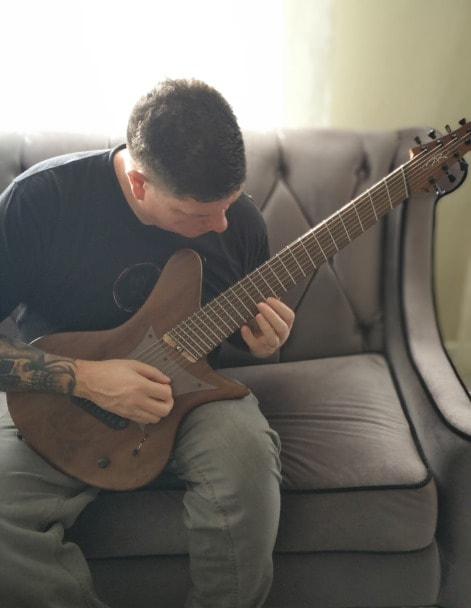 Impressions
This guitar is fun to play!  I have been playing 7- and 8-string guitars for a few years, so I am pretty comfortable with the extra strings and longer scale length, but this is the first time that I have played a multi-scale guitar aside from brief encounters at music stores.

The thing that jumps out immediately is the clarity of the 8th string.  I have played the instrument with the 8th string tuned both to F# and E. To make sure that my ears were not deceiving me, I A/B’ed the Iris and my Ibanez Prestige RG852 8-String (EMG 808 pickups and a 27” scale length, strung with Ernie Ball 10-74).  The extra inch of scale length on the 8th string of the Iris noticeably improves string tension and feels tight and responsive.  The RG852 in identical tuning definitely has less string tension, and sounds a little bit flubby in comparison.

The neck profile isn’t nearly as thin as the RG852, but I found it very comfortable to play even after an hour or more of play time.  The neck finish is very silky and smooth and doesn’t feel sticky even after working up a little sweat.  I was able to adapt to the multi-scale layout pretty quickly, and didn’t really have to even think about it after playing on it for just a couple of hours.  The fretwork itself is very nice, and I don’t feel any sharp edges along either side of the neck.  I made sure to play a mixture of single note djent riffs, standard power chord chugging, and a handful of jazz chords and leads.

The bridge is very comfortable with no noticeable sharp edges when palm muting, and this thing stays in tune!  As you can see in the picture above, the bridge angle aligns perfectly with my right hand.  I tend to pick aggressively and I have been keeping an eye on the tuning before and after playing with a Peterson strobe tuner.

Jason mentioned that his pickup was voiced similar to the Seymour Duncan Nazgul.  I just happen to have the Sentient/Nazgul set in my Mayones Duvell 7, and I would have to agree that he pretty much nailed the voicing when in the full humbucking position.  My amps are dialed in for modern metal tones, so for me personally I found the the single coil, or out of phase pickup selections to be too noisy to use in a high gain setting even with a quality noise gate.  I wanted to give them a fair chance, so I did noodle around on the clean channel of my Triamp with some Earthquaker Devices delay and reverb effects and found them to sound decent.  Jason was trying to expand the tonal palette of a single humbucker with the addition of the single, parallel, and out of phase options.  These additional available tones might be useful to some players.

This particular instrument only has a bridge pickup, although a two pickups is standard.  With all of the guitars that I play though my rig, and not just the Iris, I find it necessary to switch to the neck pickup to alleviate some of the shrillness when playing leads.  This isn’t really a negative ding against the Iris since it is an available option, and I can also remedy the situation by adjusting the mids and treble of my amplifier.  It is just hard to have the best of both worlds, tight and focused modern metal rhythm tone and a smooth lead tone without making an external amp or pedal adjustment.

The guitar shape itself is obviously original.  I find it comfortable to play standing or sitting.  The guitar is balanced well when playing standing up, with no neck dive. 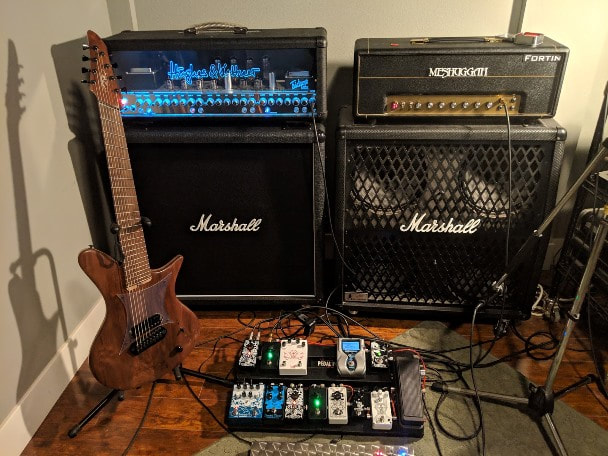 Rig Rundown
​I tested the Iris through my Fortin Meshuggah head, a Fortin 33 boost, with a Fortin Zuul in the effects loops into a Marshall DM1960A, as well as a Hughes and Kettner Triamp MKII, with a Fortin 33 boost, and a Fortin Zuul in the effects loop into a Marshall 1960B. Earthquaker Devices Dispatch Master and Avalanche Run for clean channel use.  Peterson StroboStomp 2 for tuning accuracy. 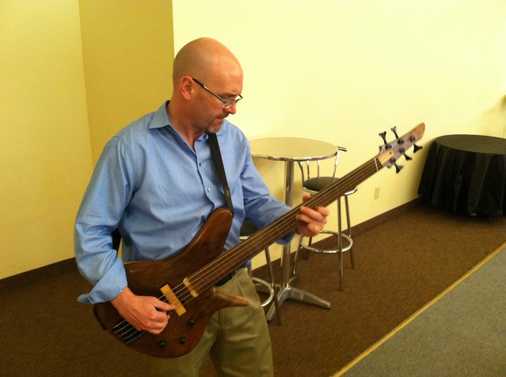 Lon Whittier, Plymouth, MN
​"When my longtime friend Jason asked me what my next axe was going to be, without hesitation I answered "a five string fretless bass."  He asked a few questions about what I liked in the basses I had and a few things immediately came to mind: the neck had to be a thin style, good sustain, and a great tone.  Little did I know he was working on a secret project making one for me as a wedding gift.  Once I played this beauty, it delivered all those things and more!  The multi-scale neck takes some getting used to, but Jayemar Guitars is definitely titling the scales in my favor!" 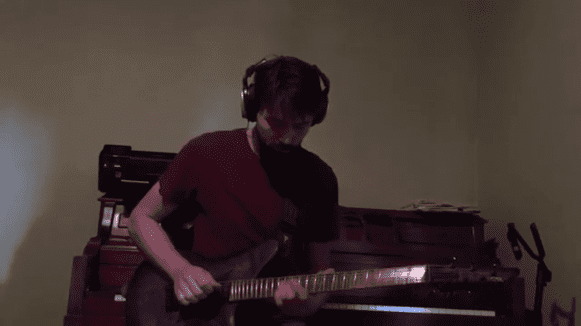 Brandon Sause, Portland, OR
Brandon's thoughts on the Black Maple Iris 6-string...
​"I was really skeptical of the idea of multi-scale.  I own a Strat and an SG and am mostly drawn to more classic styles of playing.  After the easier-than-expected initial adjustment to the feel of a multi-scale guitar, I got to appreciate the benefits.  I noticed that low E and A had more snap and clarity.  The intonation was fantastic!

The pickups and tone controls were great.  The model I tried out had an HH configuration with a standard 3-way switch.  This model also had a push-pull pot which allowed you to bypass the tone control.  This was fun to play with!  The tone control was really responsive so I was able to dial in a perfect darker rhythm tone and then bypass it creating a treble boost effect for lead parts. Really cool idea!

The set up was spot on and effortless to play.  I was worried that bends would feel weird with the slanted frets, but that went away after a minute or so of playing.

Jason is a total craftsman.  His guitars are works of art and you can see and feel his love for building the second you pick them up." 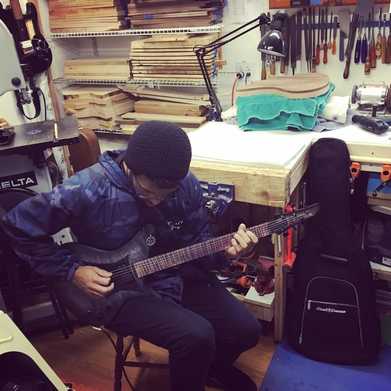 Irvin Smith, Vancouver, WA
Irvin's thoughts on the Black Maple Iris 6-string...
​"I love how articulate this guitar is.  Playing weird chord shapes and letting each note ring out, it's cool to actually hear all the notes instead of it being muddled.  My first time playing a multi-scale, but this guitar is so comfortable it wasn't hard to adapt.  Not to mention it looks amazing!"
​
Irvin composes, plays, and produces his own music under the name The Vestigial Crow. 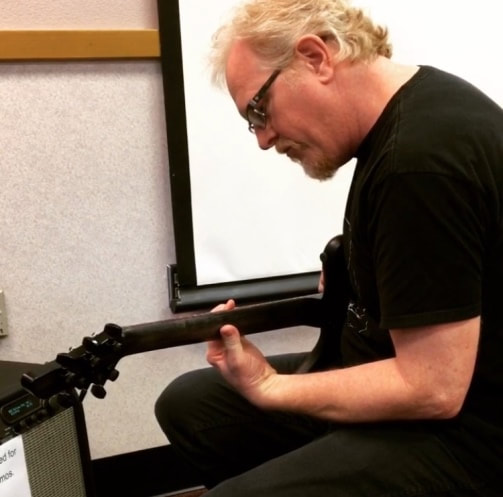 Kevin Kingrey, Hood River, OR
Kevin's thoughts on the Walnut and Spalt Iris 6-string...
"​1. Great tone.  Big, huge, ballsy lows, like a baritone.  I.Love.That.  For fingerstyle electric (which is a big part of my style), this is hard to beat.  These pickups are the shizzle, and the long bass scale needs no comment.
2. Nice balanced feel and handling.  It's very comfortable to play.
3. Superior fit and finish on wood and fretwork.
4. Original and excellent tonewood choices.  Sounds fabulous unplugged: I would even consider recording it this way.  I've been playing this thing with some really good Dire Straits-style backing tracks.  Amp set just to break up slightly when signal is pushed.  Positions 2 and 4 kill it." 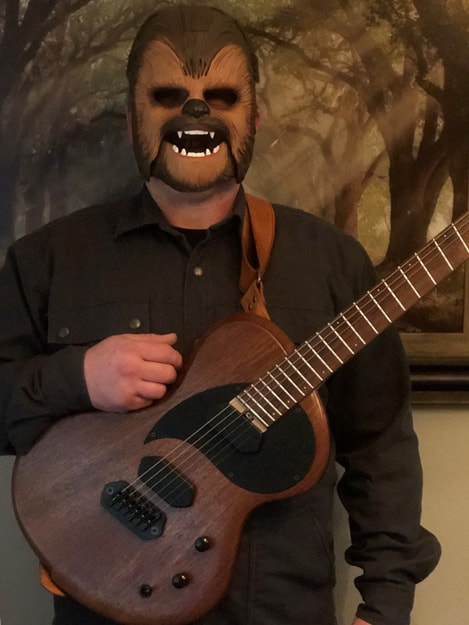 Jason Sather, Beaverton, OR, on his Alma Prototype
"I have several guitars that over the years I have formed an attachment for, guitars that hold a special place in my heart for one reason or another.  Last year, I made the leap and asked Jason about the Alma.

I don’t have a lot of extra cash, so a purchase like this I did not take lightly.  He told me it was the first, a prototype, which for some might seem like a risky thing to take on, but damn it, I loved the look of this guitar.

As far as guitars go it’s the best purchase I’ve ever made.  I strap this on and feel instantly at home.  It’s light and feels easy to do just whatever I want.  For those of you second-guessing multi-scale guitars, don’t.  I don’t even notice it, it feels completely natural.

Jayemar Guitars are made by someone who loves what they do, and it shows." 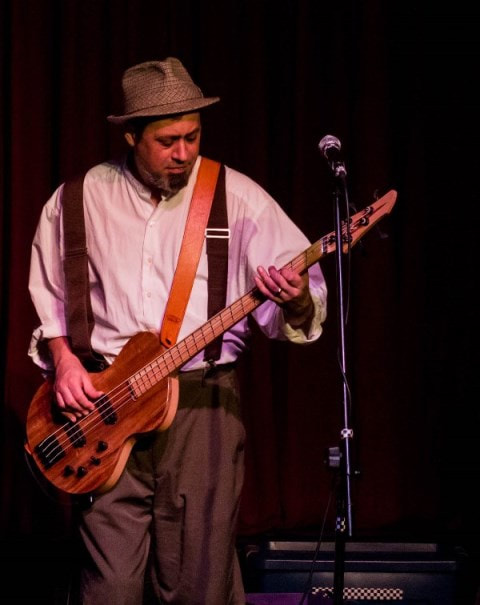 Matt Cockrell, Portland, OR, on his Koa Alma Bass
"I honestly can't say enough good things about my Jayemar instrument!  I received the Alma Bass as a gift and waited a few months before writing this review to get to know it better.  Now that I've played with it both at home, in the studio, and on stage I can say without reservation that I love it.

It looks great.  The lines are clean and sexy, multi-scale frets, solid hardware.  Mine has a Koa wood top that really gives it a unique personality and has a deeper meaning for me since I proposed to my wife in Hawaii.  Love the Koa Wood.  It feels great.  It's not too heavy, and the thicker neck balances the weight comfortably so I never feel like I’m holding it up.  The custom wound humbuckers with rare earth magnets are hot!  The results of which is a beautiful rich tone and sustain for days.  My bandmates love my new tone, and I've already gotten lots of compliments on the bass from family, friends, and fans.

I've even met the man behind Jayemar and was impressed.  His attention to detail, pride in craftsmanship, and the quality of finished product make my Jayemar Alma Bass not only a one of a kind, but a once-in-a-lifetime instrument.  Thank you, Jason, I wish you all the best.
Sincerely,
mattC"

Ben Haynor, Portland, OR
​Ben's thoughts on the Walnut and Spalt Iris 6-string...
​"The Jayemar Iris is a sight to be seen, and so fun to play.  The spalted maple on the back is gorgeous, as is the overall design.  Unlike other offset guitars I've played, the body style feels comfortable in a seated and standing position.

I had never before played a multi-scale fretboard, but felt right at home within minutes.  The spread of scales make the low strings punch and the high strings sing.  Where standard electrics sometimes feel lifeless in dropped tunings, the Iris played beautifully.  The pickup combinations were a blast to play with through effects and an overdriven amp, each with their own unique sound.

Jayemar guitars are unique and made by a true craftsman.  Jason has dialed in his designs and pickups.  Can't wait to see his future builds!"

Ben plays guitar in the Portland-based funk/soul band Hammerhead - His Head is a Hammer.

Hear Ben play this guitar...
Order Now!
Back to About